Manchester United’s bid for Cody Gakpo would have to be hastened as World Football Regulatory body, FIFA, has rejected the Dutch FA’s appeal to extend their transfer window. This means that while most of the other top leagues in Europe will be closing their transfer window on September 1, Eredivise’s window will close a day later, that is August 31.

The Dutch FA also known as the KNVB, was not initially aware that other leagues and football federations had set their transfer window closure on September 1. Their attention was called to the error when a Dutch media known as Voetbal International made a post about it. Having realized their mistake, they issued statements which stated they were not the only football association to make the error, but that other associations had made requests for a window extension and were rejected because FIFA doesn’t allow changes once the transfer window is open. So there was a “little chance” that theirs would be accepted.

True to their words, their request wasn’t granted and this would mean bad news for some clubs. The rejection has three implications on clubs in and outside the Dutch League, which are:

1. Since the Dutch transfer window will close a day earlier, it means that Dutch clubs have a day less to sign any replacements or additions. Therefore, any clubs looking to sign players from Dutch clubs would have to step up their game, if they must land their targets.

2. If Dutch clubs can’t find any replacements or have decided that the time to sign a replacement is too short, they’d be very unwilling to sell any of their players.

3. In addition, it would be hard to sign any players from Dutch clubs on the deadline day of other leagues, that is September 1, as they CANNOT sign any replacements at this point. Therefore, transfer deadline day would be short of excitement for some clubs because of the early window closure in the Eredivise.

Speaking of clubs interested in signing from the Eredivise, one of the top clubs grossly interested in Dutch players, players in the Eredivise, or players who were once in the Eredivise, is Manchester United. They have signed Tyrell Malacia from Feyenoord, Lisandro Martinez from Ajax, and free agent Christian Eriksen, who once played for Ajax. And they have also been linked to Dutch internationals Frenkie de Jong, Denzel Dumfries, and recently Cody Gakpo. 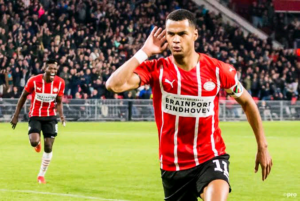 While the deals for Frenkie de Jong and Denzel Dumfries seem unlikely due to De Jong’s salary saga with Barcelona and Inter Milan’s valuation of Dumfries respectively, Cody Gakpo seems a very possible deal. Gakpo, who plays for PSV Eindhoven, impressed in their UEFA Champions League play-offs and United who are in need of an attacker are interested in his services. But with, the request for the extension of the Dutch transfer deadline day, Manchester United would have to make their move for the player early.

PSV technical director, Michael Brands, has shown some concern pertaining to FIFA’s rejection of the appeal, and made PSV’s stance of late player bids known. Brands would most likely opt against any very late or deadline-day deal for Gakpo, as they would try as much as possible to retain their top talent for the next year. So, United would try to move faster than they have in order to get the player.

Do you think United will successfully sign Cody Gakpo this summer? Tell us in the comments section.