Erik ten Hag requested that Manchester United bring in a central midfielder this summer from one of the best La Liga teams. But it appears that Casemiro’s arrival is much more likely to occur than Frenkie de Jong’s.

Most people agree that if a deal for the Real Madrid midfielder rather than De Jong can be struck, then United’s chase of the Dutch International will no longer be financially feasible this year. Though Casemiro would fill the team’s requirement for a defensive midfielder, it raises the question of who genuinely wants him. The fact that United sees him as a midfield alternative thus late in the window underlines their scattergun approach.

Comparing Casemiro, a no-nonsense midfield peacemaker, to De Jong, a player who was raised on Johan Cruyff’s Total Football philosophy, is like trying to rehome a Labrador retriever and returning home with a Rottweiler. It’s difficult to see how he could have ever been a comparable option.

Although Casemiro, who is 30 years old, would still be a vast improvement over the options now available at United and would not necessarily be a poor addition to their team, his age once again calls into question the long-term strategy—or rather, the lack thereof.

Similar to how Nemanja Matic’s acquisition in 2017 improved their team immediately, United would be receiving a player who would then probably need to be substituted in another two or three seasons. 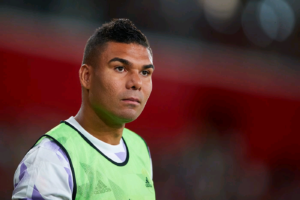 Although it is undoubtedly a reactionary decision after Ten Hag’s failed attempts to recruit De Jong or Adrien Rabiot, the requirement for an instant improvement makes this signing justifiable to relieve the pressure after a disastrous start to the season.

The fact that Real Madrid is also selling Casemiro must be understood by United. Raphael Varane’s acquisition appeared to be a brilliant move a year ago, but his subsequent injury problems have demonstrated that the La Liga winners should have sold him and moved on with their money rather than risking it on him. They compensated for the sale of the Frenchman, who was sold for £42 million, by signing Antonio Rudiger and David Alaba for free in recent years.

With the signings of Eduardo Camavinga last season and Aurelien Tchouameni this season, they will be pleased to let go of Casemiro this summer since they have already started their midfield renewal project.

He could leave the team at a time when Federico Valverde, a current colleague who learned the trade from the Brazilian international, is performing well and reduces the necessity to keep him. That is a fantastic example of how to take a departing player’s place. Madrid recruited another hopeful this summer, who will have much less pressure to get started than the hopeful they signed last summer and gave a year to adjust.

Though they had considered approaches for Camavinga and Tchouameni, United is now attempting to sign the veteran they have replaced rather than two of the finest young players in European football. Although Casemiro is an improvement for United, he is not the long-term fix. They could have understood it if they had a plan.