Pep Guardiola Talks On Haaland Aiming For The Golden Boot

Pep Guardiola is confident that Haaland expects to continue his goal-scoring prowess. Jack Balmer of Liverpool was the last player to score three straight hat tricks in the Premier League, doing so in 1946.

Pep Guardiola, whose City team will play at Aston Villa on Saturday night, added, “People can expect it from him, it’s pleasant, it’s good.” “I would prefer that, and I also want him to anticipate it.
“I appreciate his desire to score three goals per game, but this is not realistic. Everyone in the football community understands it’s not going to happen, including me.

“If it doesn’t happen, then that’s fine. Next, what? In the following time, we’ll work to improve. However, due to this man’s outstanding career numbers, there is expectation.
“It’s impressive that he has nine goals in five games. The ideal start, though, is not what matters. Pep Guardiola forewarns against Haaland scoring a ton of goals every game, but he anticipates that the more he plays with his new City teammates, the more dangerous he will become. 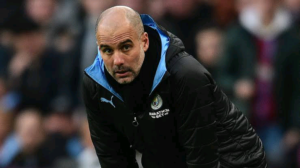 Pep Guardiola said that it takes time and he needs to be aware of the locations of open areas where he can drop. He continued that there were times when dropping is unnecessary because there wasn’t space and he is, of course, a man who is in a box.

According to Pep Guardiola, they wanted to play there a lot, score a lot of goals, and put a lot of balls there to give him a sense of security and let him use his tremendous weapons. He enters the box with the confidence that he can score. This is what they intend to carry out regarding Julian [Alvarez].

Aymeric Laporte underwent knee surgery and won’t be ready until the following month, so City paid £15 million on deadline day to acquire defender Manuel Akanji from Borussia Dortmund. “With only one year remaining at Dortmund and a wealth of experience in Germany and for Switzerland, ” Pep Guardiola remarked, “We had the potential to bring Manuel in.”

According to Pep Guardiola, they are thrilled to have him here as competition for the central defenders because they faced off against him when they played Dortmund.