Marco Silva, the manager of Fulham has slammed Arsenal for being “lucky” after the Gunners defeated his team 2-1 on Saturday. In north London, the Cottagers outran their unbeaten rivals and gained the lead. However, the visitors’ advantage was short-lived as Gabriel’s late goal gave Arsenal the victory. Martin Odegaard had previously brought the visitors even.

Marco Silva Talks On Their Match Against Arsenal

The outcome was the loss of Fulham’s league-long unbeaten streak. And after taking the London team into the top division and having a strong start to the campaign, Marco Silva expressed his disappointment at the Emirates Stadium during a close match that went in favour of the home team.

Marco Silva said that they (his team) were unfortunate, also the two goals Arsenal scored were fortunate and they [Arsenal] didn’t have many clear chances.

Marco continued to say that there weren’t many obvious opportunities he saw for Arsenal and That Arsenal was fortunate to score with the deflection after the game had gone up 1-0 (when it appeared to be more competitive). He also said that they kept trying till the very end, even after Arsenal scored the winning goal and he hoped that the poor karma they (he and his team) experienced this evening would continue. 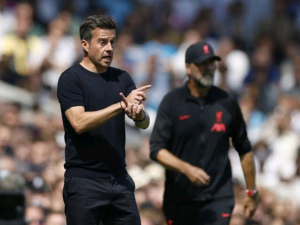 Aleksandar Mitrovic and Nathaniel Chalobah came close to scoring, but home goalkeeper Aaron Ramsdale twice denied them. Marco Silva said that his team took many positives and responded well to their opponents’ goals.
Silva said that from the very beginning to the very end, their determination to rise to the task was present and he would give all the credit to his players. He said that they had trouble on the ball in the second half, although Arsenal put a lot of pressure on his team and they kept on creating opportunities because they deserved more from the game.

He continued to say that at that time, the deflection they used to get that goal was bad luck, and they don’t know how they scored the second goal, in all honesty. Also, he said that the outcome didn’t go on their way, but he has no doubts that the attitude and dedication they displayed this afternoon would work in their favour.

After their victory, Arsenal had 12 points, which kept them atop the standings. When Manchester City defeated Crystal Palace 4-2 in one of the afternoon kickoffs, they momentarily passed Arteta’s squad.