Manchester United are reportedly set to offload up to 8 defenders this summer transfer window, with a couple of signings coming in for the defensive part of the team. We’ve already seen the likes of Lisandro Martinez and Tyrell Malacia arrive, and Sergino Dest could be the next in line.

Aaron Wan-Bissaka has not shown enough to challenge Dalot

Last season, Manchester United had one of the worst defences in the league, scoring 57 goals and conceding the same number of goals. The 2021/22 season was a very dismal season for United, and while almost every player at the club received some form of backlash, one of the most frequent was 24-year-old English right-back, Aaron Wan-Bissaka.

Ever since joining United from Crystal Palace for £50 million, Wan-Bissaka has not necessarily fit into the description of the modern fullback that most coaches desire now. Fullbacks are now expected to possess some attacking prowess, especially the ability to cross the ball and contribute assists to the team, while still being able to hold their defensive positions against the opposition.

While it can’t be argued that Aaron Wan-Bissaka is a good defender as he is very skilled with his well-timed tackles that stop opposition right in their tracks; the same can’t be said about his ability to attack. His poor crosses and bad all-around attacking play has borne credence to the fact that he won’t fit in Erik ten Hag’s possession-based, high pressing, attacking style of football.

As a result of his lack of attacking qualities, Aaron Wan-Bissaka has been dubbed “FOR SALE”, and with the growing interest from his former club, Crystal Palace and the little amount of game time that will be guaranteed to him, he could well be on his way out. United’s other right-back options include the Portuguese brought by Jose Mourinho, Diogo Dalot and youngster, Ethan Laird who is now on loan at Watford.

Dalot who was the first choice, during pre-season has shown signs that he could play better and make the position his own, but Erik ten Hag has consistently hinted towards driving players to their limits. With Erik ten Hag’s style of play, Wan-Bissaka cannot really challenge Diogo Dalot for the right-back position, which means that United need a right-back that will play so well that he’ll be able to either displace Dalot or push him to become a better player.

There have been rumours of United’s interest in Inter Milan’s Dutch right-back, Denzel Dumfries, who has also attracted Thomas Tuchel’s Chelsea, but Inter’s valuation of €15-25 million for him has been judged to be high. Recently, Spanish publication, SPORT, has reported that Manchester United have started considering Sergino Dest as a better and cheaper option for the right-back position. The American right-back who plays for Barcelona is also an acquaintance of Erik ten Hag’s, having played for Ajax in the 2019/20 season before signing for Barça. Based on that relationship, it is believed that the deal could go through. 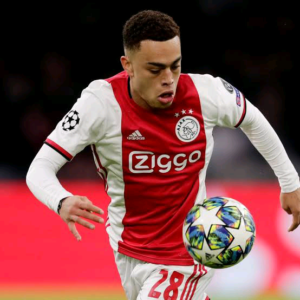 Another determining factor would be Barça securing Cesar Azpilicueta from Chelsea. If the deal goes through, the addition of Cesar Azpilicueta to Barca would further limit the game time of Sergino Dest, who has 7 goal contributions in 72 games after 2 seasons with the Catalan giants. The backup option for the right-back role at Barça would most likely be Sergi Roberto, so Sergino Dest would be looking for a club that can guarantee him game time, and Old Trafford might just be the place.

Sergino Dest is a player who plays the exact brand of football Ten Hag seeks in players. He is an attack-minded fullback who can track back to the defence well. Although he would love the chance to prove himself at Barça, La Liga salary regulations and the new additions Barça are making in the transfer market could spell an exit for him. Barça is ready to sell for €20 million, and United hope they can reach an agreement before other clubs, like Bayern Munich, Monaco and Atlético de Madrid who wanted him last year, get involved. Sergino Dest