Casemiro is on his way to becoming Manchester United’s fourth signing for this summer transfer window after it has been confirmed that Manchester United’s offer for the player — which includes a 4-year contract and an improved wage structure — has tempted him to consider a new challenge outside Madrid.

Casemiro could be the missing link in United’s midfield

Manchester United have played two games this season and lost both of them, with a porous midfield duo of either Fred and McTominay or Fred and Eriksen. But in as much as the midfield has underperformed, Eriksen has shown glimpses that suggest he would do the job he was bought for.

That brings the question down to who will play alongside Eriksen in the midfield? United have been chasing Frenkie de Jong all summer, and the deal has gotten more difficult by the day. They also sought out a move for Adrien Rabiot as an alternative, but his mother/agent’s demands have ruled the deal out. But now in the last few days, the Red Devils have added Casemiro to the list and they are now closer than ever to getting a midfield maestro.

As reported by Fabrizio Romano, Manchester United are drawing close to signing Brazilian midfielder, Casemiro, from Real Madrid. The negotiations are getting finalized and his medical could be scheduled in the next few hours. Manchester United want to complete the deal before Saturday, or in time for the Liverpool match on Monday, although it seems unlikely because even if the deal is done on Saturday, it would be too early for the player to be registered or even feature against Liverpool.

Casemiro, 30, will cost United an initial £50.7 million, which would further rise to £59.2 million with add-ons. His contract will last for 4 years with an option to trigger renewal for an additional year and will also make him one of Manchester United’s highest earners, with a £350,000-a-week that will see him earn the same amount as David de Gea. This unequivocably rubbishes the rumours that Manchester United will be doubling his current wages of £215,000. Casemiro will be reunited with his former Real Madrid teammates, Cristiano Ronaldo and Raphael Varane, and they’d be looking to rejuvenate United back to the top corridors of football. 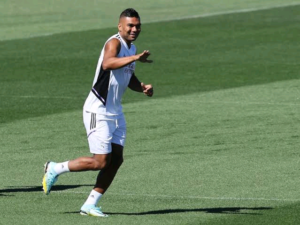 Meanwhile, following speculations of her son moving to Manchester, Casemiro’s mother, Magda de Faria Casemiro followed the Instagram handle of Manchester United for a while. This riled up a lot of fans and is perceived to be an indication that Casemiro is very close to signing for Manchester United. Erik ten Hag would be hoping that Casemiro’s arrival at Old Trafford could rally his midfield and the entire team towards greatness while adding quality, depth, and competition to the squad.