On Monday, Lisandro Martinez helped Manchester United secure their first win of the season, when they defeated Liverpool 2-1, courtesy of beautiful goals from Jadon Sancho and Marcus Rashford. The win meant that United have leapfrogged Liverpool in the table, and Liverpool remain winless after 3 games this season. But while we rant about how poor Liverpool has been, we also need to take a look at how Manchester United improved from losing against Brentford to winning against Liverpool. Here are 5 things we learned from the Red Devils’ performance.

David de Gea was the instigator of the mistake that gave Brentford their first goal last week. And after the match, he owned up and took responsibility for his mistakes in that match. The match even brought to the limelight United’s need for a goalkeeper to rival de Gea, and they’ve now begun enquiries for Martin Dubravka, Kevin Trapp, and Yann Sommer. But after those mistakes, we saw a relentless David de Gea against Liverpool. He made a couple of saves that kept Manchester United in the lead, including saving what would have been a Lisandro Martinez own goal.

I think the whole team and David de Gea deserve some credit for stepping up to the challenge, rather than sulking on their previous losses.

Tyrell Malacia has proven that he can and might take Luke Shaw’s place as Manchester United’s first-choice left-back. Even before Liverpool, the left side of Manchester United’s defence has improved both defensively and attacking-wise whenever Malacia comes on. He proved to be an upgrade to Shaw in pre-season and has solidified that proof with his performance against Liverpool on Monday night. Malacia was undoubtedly the man to beat for Mohammed Salah, and the Egyptian attacker found it very difficult to get past the 23-year-old Dutch defender.

Malacia made life difficult for Mo Salah, and although Salah got a goal, it was very hard to come by. His performance was crucial to United’s defensive structure, and he might have just secured a first-team place with that brilliant performance.

Lisandro Martinez, the so-called shortest defender in the Premier League, showed us glimpses of why Erik ten Hag was keen on bringing him from Ajax, against Liverpool. Martinez had performed below par for United’s first two games of the season, after starting in central defence with United’s captain, Harry Maguire. But it seemed like a change of his defensive partner was what he needed. Martinez showed us the ferocious and fearless defender he is, flying into tackles left, right and centre.

He and Malacia were instrumental against Salah, and he also partnered with Varane well, smothering Roberto Firmino’s presence in the match. If he continues this way and builds on his performance, he could soon become the next Vidic. 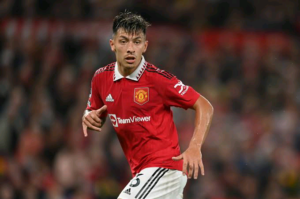 We’ve talked about Lisandro Martinez’s performance, but let’s not forget his counterpart, Raphael Varane. Varane was United’s aerial shield. While Martinez took care of most blocks and tackles, Varane manned the aerial balls of Liverpool. Having had a less than average first season at Old Trafford, Varane will certainly be looking to improve this term, and his partnership with Lisandro could be the piece that solves United’s puzzle. The cohesion between this new-look defence made of Dalot, Varane, Martinez, and Malacia looked great, as you could see them high-five each other any time they made a successful challenge or tackle, and they could “defend” United back to their glory days.

Manchester United’s striker during the pre-season is back after suffering an injury before the start of the season. And to say he was missed would be an understatement. Anthony Martial came back to the matchday team in style, assisting Rashford’s goal and also almost assisting Van de Beek for, what would have been, United’s third goal. For the first two games, Manchester United have been starved of Anthony Martial’s runs, dribbles, and footwork. But with his return, United fans could well relive that attack combination of Martial, Rashford, and Sancho that got so many goals in pre-season.