Anthony Gordon is the latest player on Chelsea’s radar as the Blues look to fortify their squad, while building a team for the future, after a slow start to the season.

Chelsea wants Anthony Gordon, as they look to build a young squad

Chelsea has been one of the busiest clubs in the transfer window this summer. Early in the window, they lost Antonio Rudiger and Andreas Christensen to Spanish clubs and Romelu Lukaku to Inter Milan on loan. Last week, they also sold Timo Werner back to RB Leipzig, and have made their intentions of loaning some of their academy graduates known.

Pertaining to recruitment, they have made some decent signings. The Blues have already snapped up Raheem Sterling, Kalidou Koulibaly, Carney Chukwuemeka, Marc Cucurella, and Gabriel Slonina. Koulibaly got his first goal for them in their first encounter with Tottenham on Sunday, while Sterling and Cucurella have shown glimpses of what they can offer within these first few games.

But the Blues are far from satisfied; they are in search of more players to buff up their squad for the games that follow in the new campaign. To that end, they have shown interest in Everton’s 21-year-old youngster Anthony Gordon.

They have already made the first bid of £40 million, which was rejected by the Merseysiders because they value Gordon higher than that. As a result, they are reportedly preparing to make another offer. And while the new bid will not be up to the £50 million valuation Everton has placed, the belief is that it is close and could sway the deal in their favour. 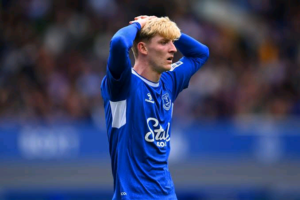 Everton does not want to sell, while Anthony Gordon wants to move

Everton has made it known that they do not want to sell Gordon, who is one of their best talents, and have even offered him a new contract. They have succeeded in fending off interest from Tottenham Hotspur and Newcastle United over the last few weeks; but with Chelsea pressing on and Gordon willing to leave, they could be forced to sell him in order to recoup funds.

The player in question, Anthony Gordon, had a breakout season for Everton last term, scoring 4 and assisting 3 in 40 matches. He is one the most important attacking players in the team right now and was crucial to Everton’s relegation survival last season.

Anthony Gordon has reportedly made it known to the Everton manager, Frank Lampard, that he wants to leave his hometown for London and wants him to consider Chelsea’s offer. He has already met with Chelsea’s representatives and based on what Chelsea has to offer — Champions League football, better wages, and a place in Chelsea’s upcoming young team — Gordon fancies his chances at Stamford Bridge. Everton is aware of the player’s contract with Chelsea but believes they can entice their prized asset, despite Chelsea’s advances.